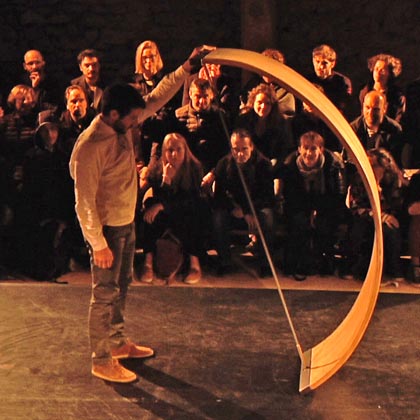 We’re excited to bring you our new interview mini series, #PhysicalStoryTellers giving an insight into the life and work of some of the artists and organisers behind the 2020 festival. 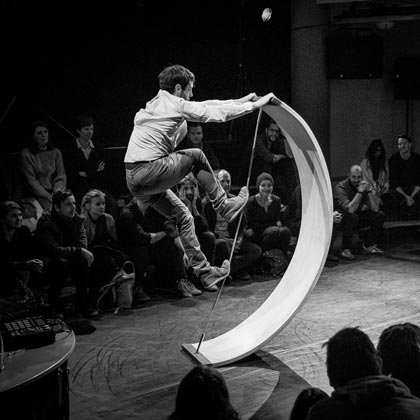 “I became an acrobat because I found school very unfulfilling, intellectually, physically and socially. Having to absorb information that I had no interest in seemed absurd to me, as did sitting on a chair for most of the day. The biggest impact my encounter with acrobatics and the arts had on me was social. Through this artform, I was working with all kinds of bodies and all kinds of innovation. All types of differences have their place in acrobatics and circus where, in many ways, diversity is the norm. This isn’t the case for western societies in general, where social norms seek to homogenise behaviour and people. This culture of celebrating and maintaining difference strongly appealed to me and I made the choice to fully immerse myself in the world of circus.

I think my inspiration for 3D stems from an unanswered desire. My idea was to create a human-sized piece of equipment based around the combining of a curve and a straight line. This object could then be used in many different ways depending on the artist’s body and their needs. In circus, we deal mainly with a body in space (which we call an ‘object’), the apparatus and the set design. When a performer chooses a specialisation, they choose to make work in a very small artistic space. Spending several years practising with a piece of apparatus generally leads a circus performer to attempt to exhaust all possible uses of his or her space, exploring as many angles and perspectives as possible. With this show, I wanted to build on this attempt to exhaust all spacial possibilities by adding in an acoustic dimension and working with a piece of sound design that interacts with the movement of the equipment in three ways: The body controlling the sound (the object is upside down); the body and sound have a symbiotic relationship with neither controlling the other (the object is tipping from side to side); the sound controlling the body (the object is on its edge). As well as this, the performer has a strong awareness of their surrounding environment.”

This visit to London is supported by Institut français   #ifru 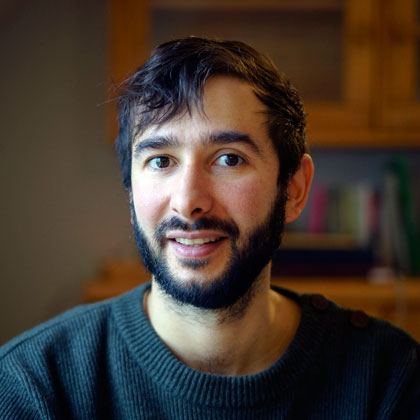 “Circus seemed like a good way of channeling my energy and my desire for expression, and as a way of going beyond myself. Circus is also a kind of life pull for me in the way it contains essential values like solidarity, kindness and working as a group. You develop a lot of empathy when working together, body to body. There is something deep in this practice; our studies at Rosny sous Bois were very intense, physically and emotionally. We were young so we felt free and able to push our bodies to the limit. It was a crazy period of our lives. And I think what remains is solidarity and kindness.

I have to precede this by saying we don’t define ourselves only as circus performers. We all come from circus backgrounds, but we don’t impose limits. As a company, we use choreography, dance, text – it’s more open.

Life is the real inspiration. For example, with Optraken I was very sensitive to the way people react to accidents or how they manage, dodge, avoid or evade situations, which could be physically or psychologically. The work is our research into the relationship between different people and a hostile environment, as well as how the body reacts and resists such an environment. We tried to set up a situation that provokes the body’s intelligence and its sense of cunning. We also wanted to create work about contemporary problems. We wanted to build and twist images relating to society’s issues, starting from concrete ideas like regulation, violence and physical constraint but without being too alarming. The very first idea was to stage action that challenged the human body, without faking it! We wanted to see someone really rushing or really avoiding: no lies, no faking, just real. To see how the body reacts and adapts. That was the idea.”

This visit to London is supported by Institut français   #ifru 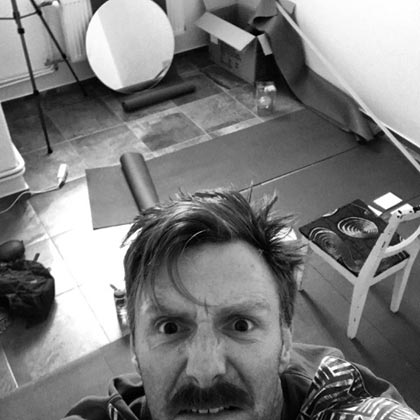 Trygve Wakenshaw brings his one man show to the festival:

“I tried a lot of things. I tried stand-up comedy, and my stand-up was ‘fine’ but I found it very difficult to write word jokes. Then I went and studied at the Ecole Philippe Gaulier and I found that the way that I was making stuff was through my body language. Being quite a tall, lanky man I found out quite early on how to exploit that for comedy. I think it’s that thing that happens when you stop focusing on writing word jokes and start working on doing physical jokes, and eventually just become better at that than the other one.

Thomas Monckton’s ‘Only Bones’ was the original. The relationship between that show and mine is like: if his one is the dad then my one is the rebellious teenager who is trying desperately not to be like his parents but has a lot of nature and nurture that means there’s a lot of stuff that’s going to come out the same. And he probably looks at himself and goes, ‘Oh my god, I do that just like my dad. How embarrassing!’ But then also does stuff that’s rebellious and off the rails.

I wanted to make my own version because I’ve always wanted to do collaborative or competitive theatre making. I really like the idea because often I feel that you make your show and it exists, and everyone says it’s nice. But you’re always trying to make a show that is better than everyone else’s – and that’s kind of a secret. Whereas this way, it feels like we’re playing the same game of football here and I want to win! I’ve always wanted to make work involving something collaborative with other theatre makers. I’ve also always wanted to work with Thom. What inspired me about his show is that sometimes you see a work and you think to yourself ‘Ah, I could have done that,” or “I could do that better.” But when I saw Tom’s show it wasn’t that feeling, but a feeling of being frustrated that I hadn’t thought of these ideas that he was having on stage. Like, he’s got something! So I wanted to see if I could get something too, not to do better but to find something else.” 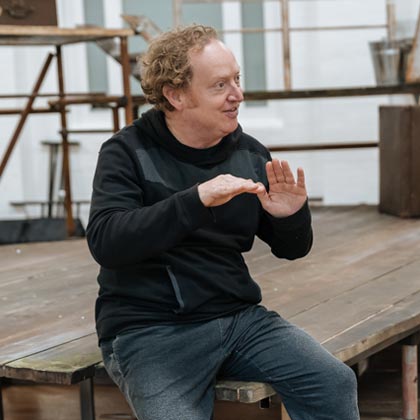 Paul Hunter of Told by an Idiot. On how he got into theatre:

“Like a lot of people, it goes back to an inspiring teacher. I had no context for theatre in my family; my mum was a dinner lady and my dad was an electrician. I liked English at school and I had an English teacher who was casting the school play at the time. I was about 15. It was a play by George Bernard Shaw called ‘Androcles and the Lion’. I, in a teenager way, said “Oh there’s no point in me auditioning because you always choose the same people.” And she called my bluff and said, “Well why don’t you come along?”

I was mainly into football and sport, but I did go along – and I got a part. She kind of encouraged me and told me this was something I could do. I thought everyone from my school went to work in the car industry in Birmingham! And then she told me about youth theatres and I went and got involved in a youth theatre, and then suddenly started to think, well, maybe I could. I started to think about drama schools and, of course, it was a complete shock to my parents when I said that I wanted to be an actor. Their initial response was – well they were obviously a bit worried – and said, “Why don’t you go to university and get a degree, and then you’ll have something to fall back on?” I don’t know whether my response was foolhardy or brave or naïve or what, but I basically said: If I have something to fall back on, I will fall back on it. Whereas if I give it a go, and obviously if it doesn’t work I’ll have to get another job, at least I’m just going for it 100%. And I did! And, I guess, here I am: still doing it 35 years later.

I suppose I’ve always been attracted to the notion that theatre can do things that no other form can. It can make you see something or imagine something or believe something in the simplest way, in a live environment in which one group of people are watching another group of people. I do passionately believe it is still the most collaborative of art forms and that brings me back again and again and again. A group of people coming together with the endeavour to create something is always incredibly seductive for me. You don’t know what that thing is going to be and you don’t know what the journey is going to be, but you’re in it together.”

THE STRANGE TALE OF CHARLIE CHAPLIN AND STAN LAUREL by Told by an Idiot will appear at Wilton’s Music Hall on Tue 14 – Sat 18 January. More details here > 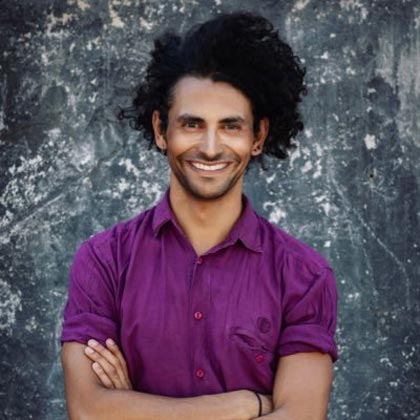 Kane Husbands of The PappyShow

“When I left working at the National Youth Theatre, it really felt like a chapter of my life was ending and a new one was beginning. I decided to go to the Caribbean, which is where half my family are from. I’d never been before so it was one of those real soul-searching trips, re-connecting with all these people. It was the most amazing trip but it also gave me some perspective and allowed me to really look at what I’d been doing by stepping outside the bubble.

‘Pappy show’ is a Caribbean word, it means playfulness and it’s probably my cousins’ most over-used word! Always calling each other a ‘pappy show’ or they’re taking each other for a ‘pappy show’… It just felt like the perfect name and I thought: when I get back I’d love to just hire a space and get some friends in the room. Who knows what will come of it, but let’s just play some games and try to carry on a little bit of the joy I’d experienced with my cousins.

Over the years, I started to think, ‘Where would I like my voice to be?’ and ‘What is my contribution going to be to theatre?’ I really found a gap in what was happening in the conversation around diversity and gender, and I thought: this is where I need to speak up. And that’s why we made ‘BOYS’.

I’m interested in really big feelings. I feel theatre has got quite conceptual or we’re using this ‘thinky’ part of our brain to understand it. I’m interested in the big emotions. So I want to make theatre that hits you in the gut and makes you belly laugh or makes you weep and you don’t know why you’re crying. I’m interested in moving audiences in that way and then they can go away and unpick why it affected them.”  Artistic Director, Kane Husbands